Quilt Backs and all that Jazz

When I started  taking classes with Judith Wilson, the very first quilt I made had a pieced back – I just needed a few extra inches across the width of the quilt, and so I added a strip of fabric, and then added a crosswise strip to add balance. 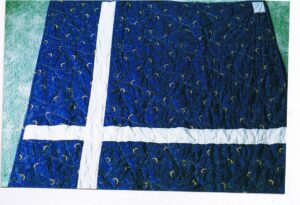 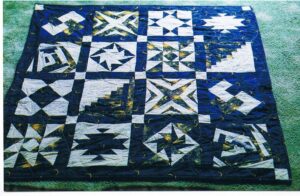 A few years later and the project was this fabulous Storm at Sea variation..  The term started off fairly normally but by the end of the term I was in the midst of a family crisis and there was no money for backing fabric for my lovely quilt.  So I improvised.  I pieced together every scrap left over from the top until I had created a piece of fabric large enough for the back.  It wasn’t pretty, it wasn’t planned, but by golly I wasn’t giving up!  I had to put in a couple of bits of bottle green polycotton from some dressmaking, and some black Spraytime from a different project to make up the size, but we got there, and the quilt got finished. 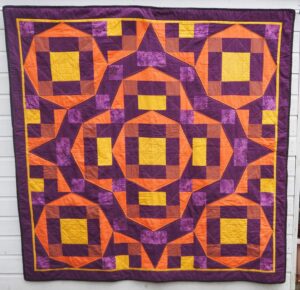 Storm at Sea design created in solids based on an Amish Palette. 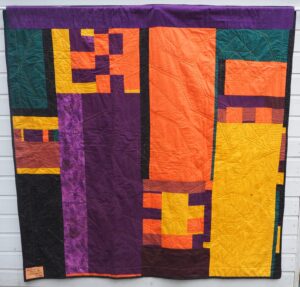 Storm over an Amish Sea – Back

There were a few quilts made around that time that had pieced backs.  I would like to suggest that I design them all, these days but to be honest I am a much more reactive creator, than proactive!  If I have a piece of backing fabric large enough then I will use it.  There’s no point in making work after all!  But when my top is wider than the standard width of fabric then I get creative.

There are no rules, but as a guideline I would always suggest that you avoid trying to create centre lines and borders on backings.  It is really hard to ensure that everything lines up front and back, so best to avoid making things too difficult when it’s not necessary.  There is something very pleasing about asymmetry – the proper term for having things go a bit wonk!!  Just remember that asymmetry doesn’t mean unbalanced – you may want to add an extra element as I did in Eloise’s Stars. 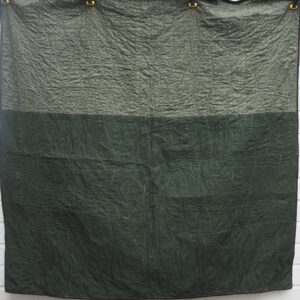 Back of the quilt, Jazz Jam 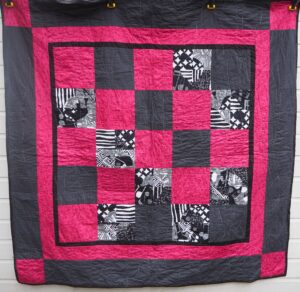 Jazz Jam has a very simple pieced block.  It is just two pieces of fabric, but see how they don’t attempt to split the quilt into equal portions.  One third and two thirds is a nice balance, 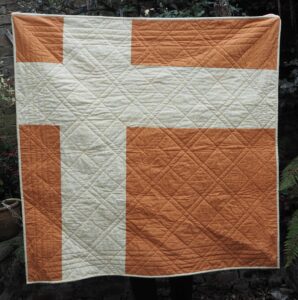 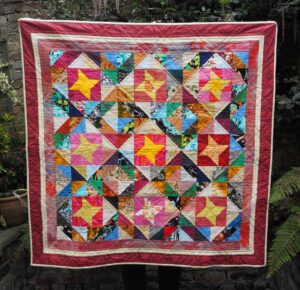 I have got some more backs to show you, but I will add them to this blog post later.  I need some good weather to get some photos and we seem to have moved back into Monsoon Season!

We use cookies on our website to give you the most relevant experience by remembering your preferences and repeat visits. By clicking “Accept”, you consent to the use of ALL the cookies.
Cookie settingsACCEPT
Manage consent

This website uses cookies to improve your experience while you navigate through the website. Out of these, the cookies that are categorized as necessary are stored on your browser as they are essential for the working of basic functionalities of the website. We also use third-party cookies that help us analyze and understand how you use this website. These cookies will be stored in your browser only with your consent. You also have the option to opt-out of these cookies. But opting out of some of these cookies may affect your browsing experience.
Necessary Always Enabled
Necessary cookies are absolutely essential for the website to function properly. These cookies ensure basic functionalities and security features of the website, anonymously.
Functional
Functional cookies help to perform certain functionalities like sharing the content of the website on social media platforms, collect feedbacks, and other third-party features.
Performance
Performance cookies are used to understand and analyze the key performance indexes of the website which helps in delivering a better user experience for the visitors.
Analytics
Analytical cookies are used to understand how visitors interact with the website. These cookies help provide information on metrics the number of visitors, bounce rate, traffic source, etc.
Advertisement
Advertisement cookies are used to provide visitors with relevant ads and marketing campaigns. These cookies track visitors across websites and collect information to provide customized ads.
Others
Other uncategorized cookies are those that are being analyzed and have not been classified into a category as yet.
SAVE & ACCEPT